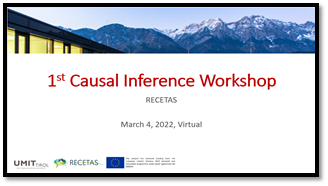 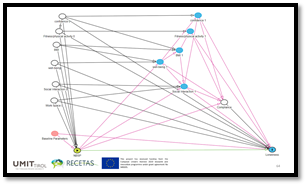 On March 4, 2022, RECETAS held the 1st Causal-Inference Workshop. Partners of all six study sites were invited.

RECETAS aims at evaluating nature-based social prescribing (NbSP) within Europe, Latin America, and Australia. Among other aspects, we will evaluate the causal effect of NbSP on loneliness. The purpose of the workshop was to present the planned causal analyses, discuss data that might be needed for causal inference analyses, and learn about data and their format that are planned to be collected.

For causal analyses, it is important to either have a randomized controlled trial or – in the case of observational studies – to have sufficient data to control for confounding. For the assessment of a sustained intervention effect, for both the experimental and the observational setting, it is important to control for post-treatment-start time-varying confounding that may occur when the intervention impacts factors that again impact adherence (intervention-confounder loop). To identify these intervention-confounder loops, causal diagrams, more specifically, directed acyclic graphs (DAGs), are a helpful visual and analytical tool to discuss causal relations on the pathway between the intervention (NbSP) and outcome (loneliness) and to identify variables that are relevant for a valid causal analysis.

After Ursula Rochau welcomed everyone to the workshop, Felicitas Kuehne introduced the causal concept as background for the planned causal analyses, Uwe Siebert presented the concept and logic of causal graphs and specifically DAGs, and Laura Coll Planas introduced the logic model concept. These presentations lead to a lively and fruitful discussion including all participants regarding variables that are planned to be and should be collected at the different study sides.

The focus of the discussion was on defining factors leading to participating in or abandoning the NbSP-programs, mode of action of the programs, and whether these factors also have an influence on loneliness. Furthermore, it was debated how information overload in the questionnaire can be avoided, and how the feasibility studies may help to identify factors leading to discontinuation of the programs.

The results of the workshop will help us defining the causal diagram, which will be applied to identify factors that are crucial for drawing causal conclusions on the effect of NBSP-programs on loneliness. As next steps, we will create a draft of a causal graph, discuss the causal relations, and agree on a final causal graph. This graph will then be used to identify factors that need to be collected in the trials.

ALL NEWS
We use cookies on our website to give you the most relevant experience by remembering your preferences and repeat visits. By clicking “Accept All”, you consent to the use of ALL the cookies. However, you may visit "Cookie Settings" to provide a controlled consent.
Cookie SettingsAccept All
Manage consent

This website uses cookies to improve your experience while you navigate through the website. Out of these, the cookies that are categorized as necessary are stored on your browser as they are essential for the working of basic functionalities of the website. We also use third-party cookies that help us analyze and understand how you use this website. These cookies will be stored in your browser only with your consent. You also have the option to opt-out of these cookies. But opting out of some of these cookies may affect your browsing experience.
Necessary Toujours activé
Necessary cookies are absolutely essential for the website to function properly. These cookies ensure basic functionalities and security features of the website, anonymously.
Functional
Functional cookies help to perform certain functionalities like sharing the content of the website on social media platforms, collect feedbacks, and other third-party features.
Performance
Performance cookies are used to understand and analyze the key performance indexes of the website which helps in delivering a better user experience for the visitors.
Analytics
Analytical cookies are used to understand how visitors interact with the website. These cookies help provide information on metrics the number of visitors, bounce rate, traffic source, etc.
Advertisement
Advertisement cookies are used to provide visitors with relevant ads and marketing campaigns. These cookies track visitors across websites and collect information to provide customized ads.
Others
Other uncategorized cookies are those that are being analyzed and have not been classified into a category as yet.
Enregistrer & appliquer
Propulsé par